Grandma Li of Yuhu village shows off what she calls 'wild mint' (oregano).

In December 2018, I joined Ryan Pyle Productions on my final epic filming adventure in China. The premise was simple on paper: light-hearted half-hour episodes featuring home recipes of grandmothers from eight different Chinese provinces. But in practice, it was a chaotic pendulum of emotions swinging from scenes of heavenly beauty to tearful stories of poverty and loss. It felt as if years of life's ups and downs were distilled into two months of shooting. Maybe that's why it's taken me so long to process these photos.

The show, Granny Knows Best, can be streamed in China on Tencent Video. It has 28 million views to date. It's probably a good thing that I wasn't involved in post-production - I got quite attached to the sixteen grandmothers I got to meet and might have spun the show in a different direction. So I guess I'll have to use this visual journal as my outlet.

It's not every day I get paid to scoot around taking snapshots of China's prettiest villages. And it's once in a lifetime that I get to hug and hold the hands of grandmas as if they were my own (my grandmothers died before I was born). These are precious moments to me. Hopefully through these images I can share my appreciation of how wonderful these women are and the extraordinary lives they've lived.

I call this Nainai Speed Dates; nainai being the Chinese word for grandma. 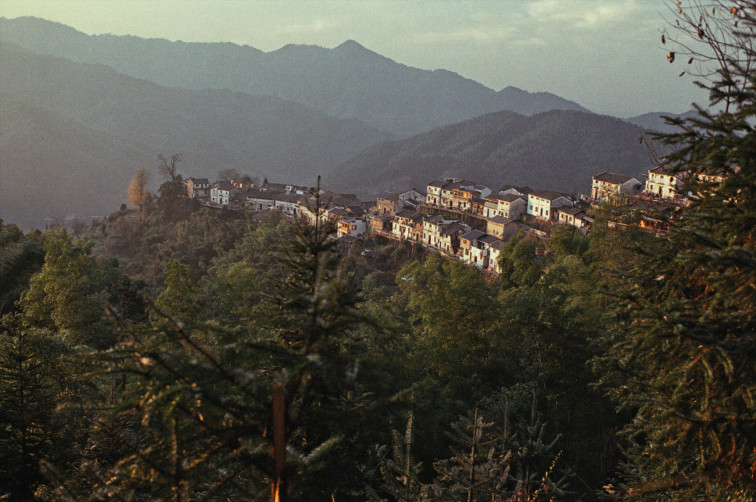 The fifty families who get to live in this majestic 300-year-old village wake up above the cloud sea during winter. Alas, the best scenic moments were captured when we were busy filming, so this sunset shot from my own film camera doesn't quite do it justice. There's no road to drive up to this village - you have to hike up about 800 steps. 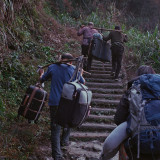 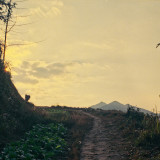 Perched on a mountain ridge, space in Mulihong village is at a premium. If any more houses were to be built, there's a fair chance it would topple to the bottom of the valley. The narrow pathways are made even narrower with wooden racks used to dry the autumn harvest for preservation. Not much grows in the winter - except for winter shoots from the surrounding bamboo forest, which is the local delicacy we chose to feature in the show. The other featured dish was 'stinky mandarin fish' - a preserved, fermented dish which harks back to a time when fresh fish would have spoiled well before it reached here.

Wang-nainai ( 汪助囡 ) told us about the night when her husband suddenly went from drinking and partying with friends to the brink of death in just a few hours. Every morning, Wang-nainai wakes up well before dawn to brew medicine for hours in her claypot and helps her husband to drink it. He's too weak to move around unsupported.

Like most of the other villagers, their children moved far away to the big smoke in search of education and work. They want Wang-nainai to join them in the city for convenience and better quality of life, but I can understand why Wang-nainai and her husband would rather choose to keep the fires burning in their ancestral home.

I had brought my portable editing workstation with me and it was the start of the shoot (before our arduous mission took its toll) so I managed to bash together what we filmed with Wang-nainai in a few days and showed it to her before we left:

Hong-nainai ( 洪春囡 ) broke into tears when she told us about the tragic accidental death of her son-in-law. She and her daughter fight through each day to keep their restaurant and guesthouse running despite their grief. It was a sobering reminder that this journey wasn't going to be all winner winner, chicken dinner. Chinese grandmothers all toiled through some of the hardest, most impoverished times in China's history and gave their children everything so that they wouldn't have to struggle the way they did. For me, it set the tone: I'm so lucky just to be alive, let alone to be a filmmaker! 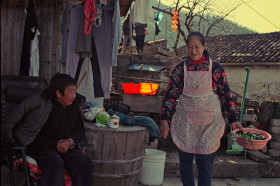 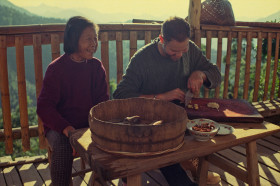 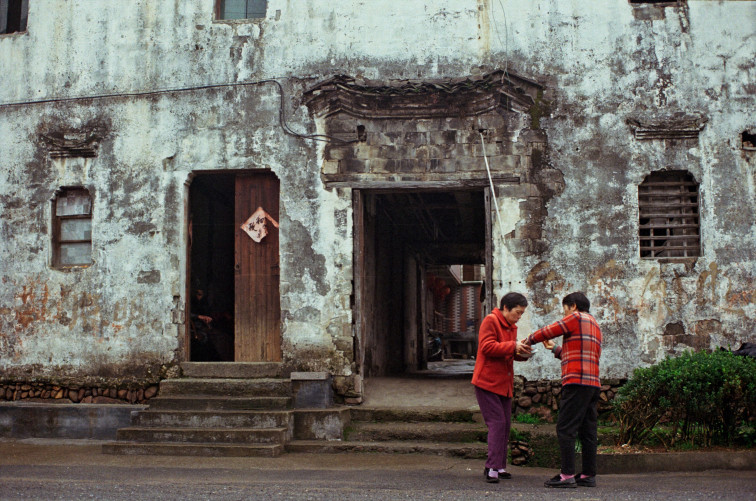 Away we went to our next destination, Panzhoujia village, famous for its hand-made long-life noodles. Why do they call it long-life noodles? Well, the longer the noodle, the longer your life. Chinese folk beliefs are quite straightforward and logical. According to a Chinese TV report, a kilogram of flour, water and salt from Panzhoujia can be pulled into a 200-metre long unbroken noodle. Not sure about the veracity of those claims... 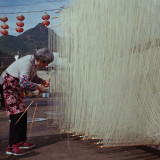 Either way, noodles have long been the livelihood for these villagers. Chen-nainai ( 陈凤青 ) introduced us to the process - the dough is mixed in the day, rested, cut into lengths in the afternoon, rested, wound around a contraption in the evening, rested, then, at night, they wake up every couple of hours to stretch the noodles more and more, delicately separating the harp-like strings. Come dawn, the noodles would be taken out to dry in the sun, cut to size (ouch!), and packaged to sell in shops around the country. 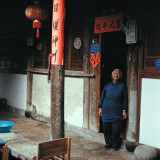 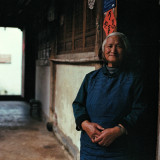 I loved wandering around the 800-year-old village, peeking into sheltered courtyards shared between the three or four houses surrounding it. There's something about this style of architecture that means you'd have to be as cheerful a neighbour as Chen-nainai to live here. It was so great to see her happily playing cards with her friends in the afternoon, especially after hearing that when she was younger, she had only one small basket of vegetables to feed her family each week. In the nearby township of Zhengzhai, we met Zhang-nainai ( 张美仙 ) who sells genuine wood-fired tofu skins at the market. She and her husband forego sleep three nights a week in a process even more laborious than long-life noodles. They start before midnight: soaking, washing and grinding 25kgs of soy beans before cooking the pulp above a wood fire. The pulp is strained into soy milk and spread across wide, steaming pans. Every twenty minutes for the next 10 hours or so, Zhang-nainai and her husband lift off the solidified top layer of the soy milk from each pan and hang it up to dry.

We were only hardy enough to stick around filming until 5am before we needed a nap. By the time we returned a couple of hours later, the room was full of skins. Below is Zhang-nainai's mother-in-law. At 97 years old, she would have come of age during China's most horrendous wars, worked through the Cultural Revolution and rode the wave of reform into the 21st century. And there she was, wordlessly grinning at the weirdoes from Canada, USA and New Zealand, as if she was having the time of her life. The ancient spirits of the Pacific are stirring. | Courtesy of Tikilounge Productions

Teine Sā is a contemporary horror television series, with five episodes based on supernatural legends from across the Pacific Islands. Teine Sā are the ancient spirit women, many of whom are malevolent, and others who bestow blessings.

After centuries of slumber, the Teine Sā have been evoked once again.

Set in the modern day Pacific, ordinary women have encounters with ancient goddesses who help them in their struggles and leave lessons in their wake.

From the notorious goddess Telesa to the Hiama of the Solomon Islands, these tales of the unexpected take age-old stories on many twists and turns.

These five tales of the supernatural put a chilling contemporary spin on these legendary aitu of the Pacific whose powers are needed in the modern world.

It was a joy to see the kaleidoscope of visions from the five writer/director teams, to cut together the silken images shot by DOP Andrew McGeorge and to be given free rein to mould rhythm and soundscape as the series editor.