This is part two of four from a series of film photos I took while working on Granny Knows Best in December 2018. Nainai is Chinese for grandmother.

Sometimes you have to look backwards to see where you are and know where you're going. I'm sure it's a familiar theme for many of my migrant friends who went through quarter-life-crisis, struggled with identity and longed for deeper roots. If I could meet my 20-something younger self, I'd show him these grandmothers and say, "These are way better role models for you than Peter Jackson."

As I sift through these snapshots, I realise how that theme of 'looking back' influenced me in the years from that shoot until today: living with my parents and seeing their wrinkles deepen; joining the Pan-Asian Screen Collective to find a way forward for minorities in the New Zealand film industry; learning about story sovereignty and respect for elders while working on projects like Take Home Pay and SIS; writing a nostalgia-filled film story based on my childhood memories of Hong Kong cinema; not to mention the whole Covid thing that forced us all to stop and reflect.

Today, I'm confident that I'm no longer the little shit I once was. And hopefully I won't turn into one again. 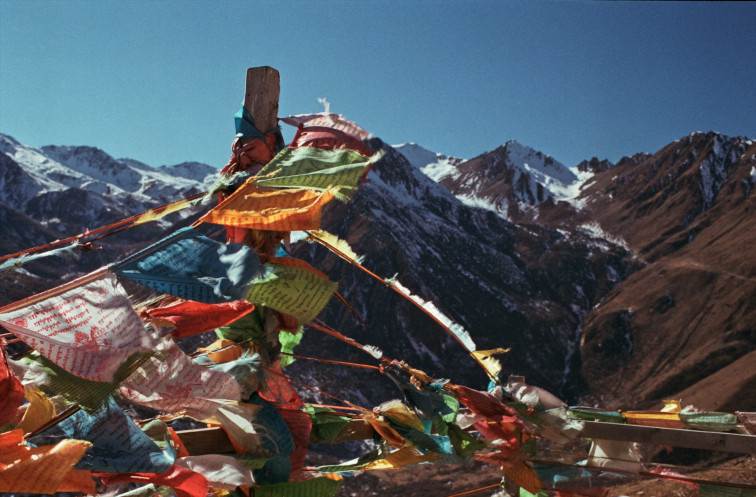 The land scrunches up into steep mountains and valleys at the eastern edge of the Tibetan plateau. Some ancient folks decided that this would be a great spot to put a village. I've read that Zhonglu was a fortress, with the steep terrain offering defensive advantage. The watchtowers jutting up between houses are proof of this heritage. One of the locals told me that families build a new tower when a son is born. Apparently there were 300 across the village at one point. I'm sure there were more than 300 sons. 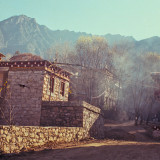 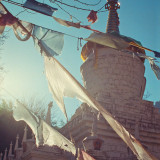 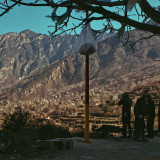 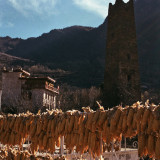 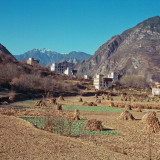 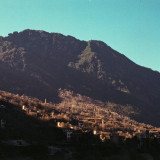 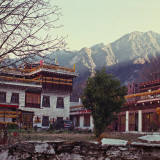 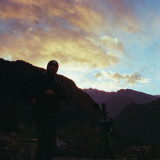 I was pleased to see houses still preserved in their original style, though most of them would be renovated with heat pumps to combat the harsh, lifeless winter. (My photos deceive—boy it was cold and the days short!) Rows of corn from the autumn harvest adorn rooftop terraces, left to dry under the scarce mountain sun. The village is on such a steep slope that every home has a view, like a titanic amphitheatre. In such a photogenic place, we met an even more photogenic grandmother.

When I directed this show for Chinese viewers years ago, I didn't think twice about the name of our Tibetan grandmother. To the majority of the audience, her sinicised name is fine: Xiage Achong (呷哥阿冲). Today, I am ashamed of not learning her name properly, especially on a show like this. It's like when our Asian names were butchered at school and we just shrugged it off (thanks to the talented Celine Dam for a great write-up).

Our wonderful producer got in touch and found out her Tibetan name – དཀར་གོངས་ཡར་ཀྲགས་ – romanised as Kargong Yartrak. (Quite a difference isn't it? I prefer romanisation as sinicisation takes the name far from its native pronunciation due to limitations of the Chinese written language.) 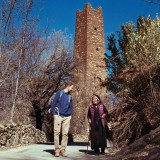 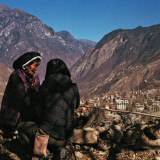 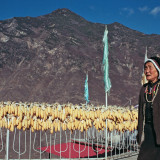 In grandma Kargong's courtyard, I was hit with the stench of pig's innards hanging on a wooden rack. To make it through winter when there's not much growing, and to live in such a remote location, the locals traditionally relied on preserving meat. We filmed a pig being yanked from its pen, screaming hellishly. The Tibetan butcher lit some candles, offered a prayer and slaughtered it in full view of its terrified stablemates. 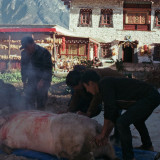 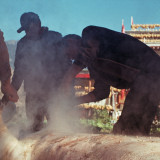 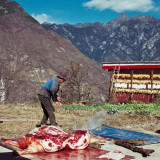 Those of us who buy ready-packed meat from supermarkets would surely feel repelled at such a gruesome scene. I was more shocked to see Tibetan Buddhists taking life – but the butcher explained that this was still compatible with Buddhism. Sure, monks and lamas would strictly uphold Buddhist tenets. However, for farmers like grandma Kargong it's about survival. They need meat to give them the strength to toil long hours in the fields. I was doubtful that this scene would make it into the final cut but I'm glad it did - it's unnatural how modern life disconnects us from the food we eat and I felt we needed to show this raw truth.

As if to fully respect the precious life they had just taken, they harvested as much of the pig as possible. Grandma taught us how to cure pork hock, how to make blood sausages by stuffing blood into intestines, and how to make 'yawo' – pig's stomach with lean meat and spices sewn inside. Yawo is also called 'cuckoo meat' as it would be hung to dry on the rack for months until the Spring Festival, when the call of the cuckoo echoing around the valley signals the right time to unwrap the delicious parcel. 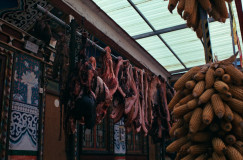 I failed to learn the Tibetan name for our next Tibetan grandmother. We called her by her sinicised name, Gemachu (格玛初). Her son had just finished building a modern guesthouse but kept a room in the traditional style. It had an ingenious Tibetan indoor hearth at its centre, which can be used to warm the family as they gossip about the annoying neighbours as well as for making dinner. It was a little disappointing to hear that none of the other houses in the village have preserved a hearth like this. I think I'll steal this kitchen-lounge fusion idea for my dream home.

Grandma Gemachu showed us how to make ash-toasted Tibetan momo - basically unleavened wheat bread baked by burying it in the ashes of the wood fire. Just a quick dust off and it's ready to eat. She dipped it in Sichuan-style chilli oil (kind of like lao gan ma). Another great idea I'll steal. It went down a treat with the classic yak butter tea. 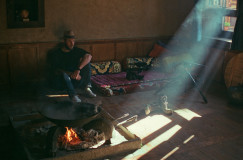 In a vast empty valley between the touristy town of Lijiang and the 6000-metre-high Mt. Yulong, the horse-riding Naxi people make their home in Yuhu village. I remember being in a very foul mood when I arrived. It was after a string of infuriating logistical challenges combined with lack of sleep. I could draw no pleasure from the fairytale-like world as my heart was weighed down with work. Until I met Laiya. 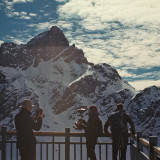 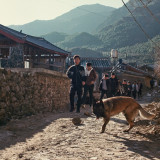 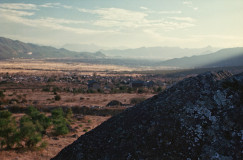 I decided to go on a walk around the village by myself. A while later, I realised that I wasn't alone. The old mutt living at the guesthouse seemed to sense my negative aura and decided to escort me around the village. I had no food on me, nothing to offer him in exchange,  yet Laiya would step when I stepped and stop when I stopped. By the end of my walk I could see the magic in the world again.

For some reason, Laiya would stick close to me for the rest of our stay (and not any of the other crew). We trusted each other so much that I thought it would be fun to have him cameo in our show. The crew thought I was nuts but hey, he made the cut in the end! 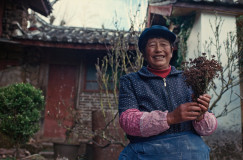 Zhao-nainai ( 赵有执 ) lives with her talented daughter, Lushan (not pictured—the one in the photos is an imposter), who started a cafe and restaurant in front of their house. We all fell in love with nainai at first sight. Especially our producer who seemed to have adopted herself into their family. Zhao-nainai helps out at the cafe once in a while but most of her time is spent hanging out at the village square with her neighbour and bestie, Li-nainai ( 李近花 ). They showed us how to make Naxi hotpot in a classic copper pot and beautiful Naxi mooncakes but I was too busy working to take any photos.

We lucked out as one of the villagers happened to be having a wedding celebration and invited us over. It was a lively night, dancing and singing with the locals around a bonfire. Zhao-nainai even took the effort to dress up her involuntarily-adopted daughter. 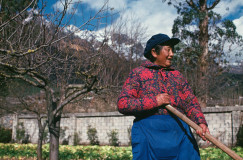 In an interview, Lushan burst into tears while telling us that her father passed away. She reminisced about the way he used to make Zhao-nainai laugh and how the old couple prepared breakfast together as a team. Behind the camera, my eyes were welling up too. These women shared not only their smiles and laughter, but also their sincere sorrows. It was an honour to be embraced by the warmth of their family.

On our last day in Yuhu, while having lunch at Zhao-nainai's cafe, I spied on the two grandmas as they chatted quietly and laughed with each other. First Laiya, then the nainais, then a festive wedding, and an episode successfully in the can – simple, serendipitous encounters piled on from moment I entered this village as if to tell me, "Don't force it! Life doesn't have to be so hard." I think that's also what this sneakily snapped photo of two old friends is trying to say. It was the halfway point. We'd filmed in four of China's provinces and speed-dated eight amazing grandmothers in our month-long shooting block. I flew back to New Zealand for a week and spent Christmas with my own family. I found it really hard to express to them my extremes of joy and suffering (especially with no pictures to show for it... until now) so I just glossed over the fun parts.

But the first half of shooting would prove to be much easier than the second...

3 months ago by Jack Woon

Adventures in the Ahom Kingdom